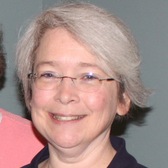 Ms. Piper was part of the first NITARP class.