The Winter American Astronomical Society (AAS) meeting is the largest meeting of professional astronomers in the world. NITARP educators attend an AAS first to meet their team, then they go home and work remotely for much of the year, and then attend an AAS to present their results.  At any given AAS, then, we could have two NITARP classes attending - those finishing up, and those getting started. However since this year marked the first year of the program under the NITARP name, only the 2010 class attended. Reload to see a different set of quotes.

For many of the new NITARP educators, it was their first AAS ever. They all had a great time, and learned a LOT.  The 14 teachers are spread among 4 teams, and they went home from the AAS to start work on their proposals, which were due in to IPAC in mid-February. 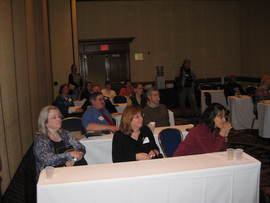