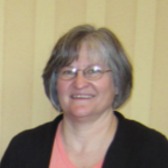 At her first AAS, she smashed through a preconception that all astronomers were going to be older people; she also learned that engineers and graphic artists can also have jobs in astronomy and earth science. She also got a lot of support from her school community after they saw the press release!