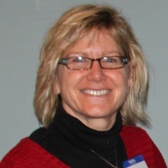 Ms. Seebode was among the first NITARP teachers.