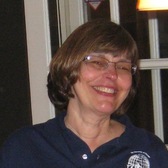 Ms. Hoette is the education director at Yerkes Observatory.