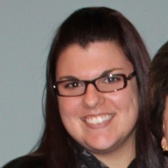 Ms. Miller is part of the 2013 NITARP class. She tweets at @d_l_miller and blogs occasionally for Spitzer!

I've always loved all kinds of science, but astronomy and geology are my favorite. I've also always loved NASA, so much so that rather than have a 16th birthday party, I attended Space Camp in Huntsville, Alabama. I took extra science classes at my Pennsylvania high school - two years of chemistry, two years of astronomy, natural science, biology and physics - which led me to a geoscience major in college. I graduated from Indiana University of Pennsylvania in 2006 with a Bachelor's Degree in Earth and Space Science education. I moved to Orlando, Florida to teach, 6th grade life science for my first year, then 7th grade earth and space science for two years. I now teach at University High in Orange County, Florida where over the past four years I've taught integrated science, physical science, and astronomy.

Though teaching keeps me very busy, I also sponsor the National Honor Society, GEMS (Girls in Engineering, Math and Science) club, and an all girls FIRST robotics team at University High School. I'm a Science Ambassador for the Orlando Science Center, a NASA Explorer Schools teacher, and was named Orange County Public Schools Science Teacher of the Year in 2011. My students have accomplished some really cool things including a team of six placing third in the first ever Florida Student Astronaut Challenge, a national winner in the 2011 Cassini Scientist for a Day essay contest, and a national winner in the Reach for the Stars rocket launch competition.  I love social media, technology, music, scrapbooking, reading, and all things space.  I'm very excited to be part of the NITARP team for 2013 along with my team of educators, students and scientists. We'll be working with data from the Kepler telescope and we're hoping to do some great science!