Teacher alumni of the program have received numerous accolades over the years for their classroom performance and achievement in the wider educational community. These teachers have inspired many students to pursue careers in science-related fields, and who have received awards of their own. This spring in particular has seen an impressive batch of distinctions go to NITARP teacher alumni and their students.

"We're really honored by all the good things our alumni have done and will continue to do for science education," said Luisa Rebull, an associate research scientist from NASA's Infrared Processing and Analysis Center (IPAC) at the California Institute of Technology (Caltech) in Pasadena, who coordinates the NITARP program. "The benefits of NITARP to teachers is further reflected by their students' success."

NITARP pairs teachers with astronomer mentors to conduct year-long, original group research projects using genuine data collected by scientific instruments and housed at IPAC. NITARP covers the travel for teachers and up to two students to NITARP workshops and to an American Astronomical Society (AAS) conference. Teachers also serve as ambassadors for NITARP, helping to promulgate its message of science education.

Applications are now available for the 2016 NITARP class and due in September. The program runs from January to January.

Plaudits for NITARP Teachers and Students

NITARP alum Adam Keeton, a 9th grade science teacher at North High School in Eau Claire, Wisconsin, is but one example of an educator who along with his students has gained from participating in the program. Citing Keeton's passion for science education and his ability to engage students in real research, the National Association of Geoscience Teachers (NAGT) recently selected Keeton as the NAGT Wisconsin Outstanding Earth Science Teacher for 2015.

Keeton credits NITARP with helping him become the educator he is today.

"NITARP was probably the hardest professional development experience I've ever had as an educator," said Keeton. "It gave me a bit of street cred with my students because they got to see and take part in the professional research I did with real astronomers."

Varoujan Gorjian of SSC and the Jet Propulsion Laboratory (JPL) mentored Keeton and the three other educators on his team on a project using Spitzer Space Telescope data. The educators and students searched the Spitzer archives for signatures of distant galaxy clusters. Keeton, his student, and the other educators and students on the team presented a poster on the research in 2012 at the 219th AAS meeting in Austin, Texas. Through NITARP, Keeton connected with a network of professional educator relationships. He has since engaged in other science-based educator development programs that have additionally enriched his students' classroom experience.

A testament of NITARP's benefits for students comes from Madie Kelly, now a freshman at Montana State University, and Hannah Cebulla, a senior at Bozeman High School in Montana. As high school students, Madie and Hannah worked with NITARP 2013 alumna Lynn Powers.

In a recent feature story on the Spitzer Space Telescope's Caltech webpage, the aspiring astrophysicists Kelly and Cebullah wrote about how they noticed, based on their participation in NITARP and other programs, "a change in our learning style, career path, and general outlook on the scientific community." They traveled with Powers to the AAS 223rd conference in January 2014, where they "were pleasantly surprised that so many astronomers were so excited and interested in the research we had performed and our involvement in the sciences at a high school age." Inspired, Kelly, Cebullah and Powers then raised money to come back to AAS to present an additional poster in January 2015.

John Gibbs, a physics teacher at Glencoe High School in Hillsboro, Oregon, is a NITARP 2011 alum and team mentor for the last three years. He has similarly seen how involving his students has tremendously benefitted their budding professional lives. On May 15, Ashwin Datta, a sophomore at Glencoe, won the 1st Place award in the Engineering Mechanics category at the 2015 Intel International Science and Engineering Fair (ISEF) in Pittsburgh, Pennsylvania. Ashwin’s research, which described a new method for protecting optics and sensors aboard NASA's Curiosity rover from dust damage on Mars, sprung from his tour of JPL with Gibbs as part of NITARP.

Another recent example of success for NITARP alums and their students is 2013 alumna Christi Whitworth. She received the "Women Who Make a Difference Award" from the American Association of University Women this May. Whitworth, the education director at the Pisgah Astronomical Research Institute (PARI) in Rosman, North Carolina, won the award for her work on various projects focusing on the education of girls in science, technology, engineering and mathematics fields collectively known as STEM.

Danielle Miller, a 2013 NITARP graduate, offers one more instance of recognition this season for alumni. Miller was recently named the Air Force Association's 2015 Teacher of the Year for the Central Florida Chapter.

A 2013 survey conducted by Rebull of 40 NITARP alumni going back to the first 2005 class offers metrics on the program's mounting impact. The program has led to about 360 student trips, involved 1,500 students who did not travel but worked on major aspects of the project, as well as another 7,300 students that contributed on smaller aspects of the project. At this point, about a decade since NITARP's launch, about 21,000 students are taught by NITARP educators per year. Meanwhile, information and influence from workshops and other ambassadorial efforts by NITARP's alumni have reached approximately 4,300 other educators.

"I would never get to talk to 4,300 educators over my entire career," said Rebull," but through the NITARP alumni community, we are getting more and better science into all of those classrooms."

Read more about NITARP alumni and student news and achievements at the NITARP News page.

NITARP, the NASA/IPAC Teacher Archive Research Program, gets teachers involved in authentic astronomical research. The program partners small groups of mostly high school educators with a mentor professional astronomer for an original research project. The educators incorporate the experience into their classrooms and share their experience with other teachers.

A primary goal of NITARP is to inspire and motivate students to pursue careers in science, technology, engineering and mathematics, as well as to engage the public in shaping and sharing the experience of exploration and discovery. NITARP originally began in 2004 as the Spitzer Space Telescope Research Program for Teachers and Students but changed names upon new funding arrangements in 2009. The program runs January through January. Applications are available annually in May and due in September. 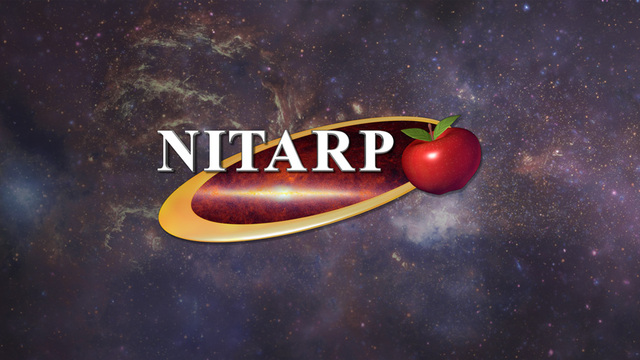