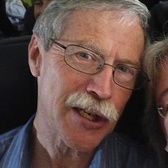 Mr. DeCoster was part of the first year of the program under the NITARP name.