Dr. DeCoster is a new NITARP teacher for 2010. He is excited about getting kids involved in the program.

He enjoyed the AAS meeting, as overwhelmingly large as it was. He learned a lot from many different talks and posters. He writes that "My students were really impressed when I gave them just a summary of some of the stuff we did and saw!"

For me the most interesting parts of the AAS meeting were the plenary talks. These talks were long enough that those without the special knowledge had a chance to understand what was being discussed.

The special session on gamma-ray pulsars [was specifically interesting to me because the subject] had just been chosen by AAAS and Science as its runner-up story of the year. I had gone back and looked at the August issue of Science and tried to at least understand the article abstracts. Being able to follow this up with talks by the people involved was really neat!

The last session that I was able to hear before dashing off to the airport was "Science with the New HST." The contrasts in the talks by Garth Illingworth and Marla Geha were mind-blowing. Illingworth was showing us distant objects with z > 8 that eclipsed the record set last April by GRB 090423, while Geha was looking at nearby dE Galaxies and showing H-R diagrams for thousands and thousands of stars in another galaxy! My NITARP colleague Kevin McCarron and I looked at their slides in amazement.

The Invited Sessions were even better in that the presenter had time to give lots of background that was useful to those of us who were far from being experts. Sessions that I particularly enjoyed were "Finding Utility in the Diverse Origins of Gamma-Ray Bursts." One of my students at Niles West had become interested in GRBs as we thought they were the results of mergers of black holes. As I understood Prof. Bloom's talk, this is not now the preferred source model at the process takes too long. My student thought it was interesting that scientists could change their minds about how things worked.

Finally much of the invited talk by Eugene Churazov on Galaxy Clusters and Black Holes I found to be understandable because he used many equations from ideal gas laws that are familiar to high school teachers and their students. In talking with Dr. Churazov after his talk, he re-emphasized how far one could go on this topic with these familiar and seemingly simple equations. The picture  is of two of my NITARP colleagues (Ms. Ramseyer and Mr. McCarron) and me posing with Dr. Churazov after his talk. 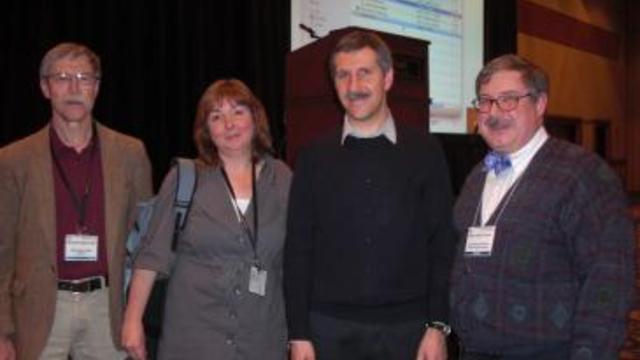