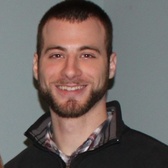 Robert Marshall is a graduate of the University of Pittsburgh with a B.S. in the field of astronomy, math, and the natural sciences. As program development coordinator and educator for the Buhl Planetarium and Observatory, he is employed at Carnegie Science Center where he presents real astronomical data to the public, develops curriculum for both University of Pittsburgh and Carnegie Mellon Osher programs, and travels the country for Fisher Science Education inspiring the teaching community. Furthermore, Robert has participated in research at Allegheny Observatory and is currently participating in NITARP.

In his free time, Robert captains the Carnegie Science Center bicycle team in the American Diabetes Association's annual Pittsburgh Tour de Cure fundraiser for scientific research. He also works with team members to restore recycled bicycles for their event ride. During the warmer months, Robert takes time off to lead children at a summer camp as camp councilor - showing them planets and galaxies through telescopes on clear evenings. Robert also sits on the board of his St. Nicholas church, enjoys rocking out on the guitar during employee jam sessions, and competing in Triathlon.