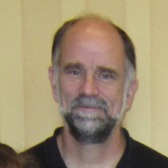 Mr. Bonadurer was one of the first museum educators to participate in NITARP, and as such, had many observations about how the various presenters at the AAS and those of us in NITARP need to make sure that there is a connection back to the larger picture.