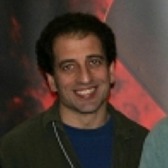 Mr. Maranto was one of the first educators in the Spitzer Space Telescope Research Program for Teachers and Students.