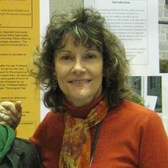 Ms. Mallory was one of the first educators in a NITARP team, and was among the first community college instructors in the program.