Mattern along with professors from Connecticut, Iowa, Wisconsin, Indiana, Massachusetts, Iowa and Mississippi were grouped in two teams to research objects and stars within our galaxy, using the Spitzer Space Telescope.

Mattern’s team, headed by Luisa Rebull, staff scientist from the California Institute of Technology, looked for young stellar objects or YSOs in the Lagoon Nebula. Overall, his team identified 185 new stars outside our solar system within our galaxy.

Every week for the year of 2019, Mattern and his team virtually met with Rebull for an hour to discuss their findings and progress on the project.

“Very hectic, busy year, but one of the most worthwhile ones since I’ve been a professional educator,” said Mattern.

Mattern’s goal was to bring resources back to his physics students, and that’s exactly what he did. Being a 2019 alumni of NITARP granted Mattern the access to online databases that hold images and data from various telescopes. Mattern then developed a new lab for Butler so astronomy students can utilize these astrophysical resources.

“I wanted to take what I learned and put it into my online classes for students to understand how astronomy research is conducted, and give them the capability of utilizing some of the resources astronomers use,” said Mattern.

In early January 2020, Mattern and his team showcased their work along with universities, grad students and astronomy professionals during the American Astronomical Society meeting in Honolulu. Several thousand people attended this “astronomy trade show.”

Overall, Mattern thought the NITARP program was very educational in learning how astronomy research is conducted at a professional level.

“Being able to use actual data from telescopes and other tools helped me understand astronomy a little better so that I can pass that on to my students,” said Mattern. 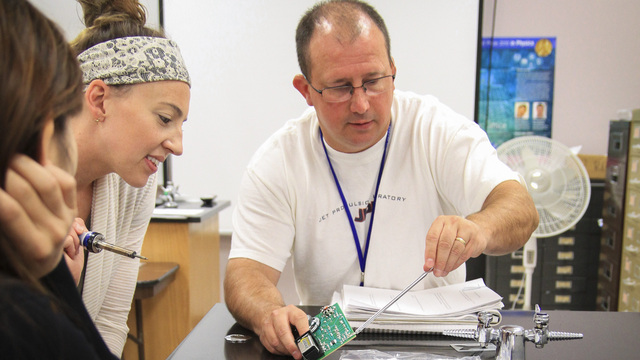