Here's an update on my NITARP students. Rosie created a 3D image of the SOFIA telescope assembly which was featured in the April 2015 edition of Sky and Telescope Magazine (p. 61). She now wants to become a theoretical physicist. Elena has used the skills she gained combining WISE images into the RGB channels of Photoshop to do the same for narrowband images of Mercury from the MESSENGER probe as part of the Student Planetary Investigators program. She used images at 430, 630, and 1000 nm and then enhanced the contrast and colors. She was able to identify several areas that appear volcanic (more sulfur). Her science fair project made it to the International Science and Engineering Fair in Pittsburgh. She won an $84,000 scholarship to a private college in Salt Lake at one of the earlier levels. She also made it to the final round of Utah's Sterling Scholar program, meaning she was recognized as one of the top 15 science students in the state. She won a $750 award from the American Geosciences Institute at ISEF. She will be our valedictorian this year. Kendall will be returning from Virginia for graduation and will be our salutatorian. Julie is working on an independent research paper on neutron stars and hopes to work with Dr. Hintz at BYU his summer, then start our new IB program this fall.

NITARP and attending AAS were major reasons why they've achieved so much. 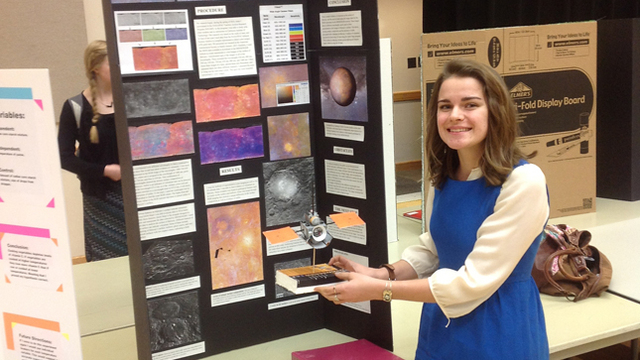